If you've ever been to NOLA, then you know Bourbon St. - where there's a party on every corner. After digging some serious 70's vibes at Fat Catz, we found our way to The Famous Door, where we traveled through time (apparently), in one block, between 1976 and 1986, and became murder witnesses, as the cover band at The Famous Door was just killin' the crowd with the best 80's rock songs. Unfortunately, I was getting another round of Dixie (Lousiana's finest local beer) while the band played an earth-shattering cover of Bon Jovie's "Wanted (Dead or Alive)", and did't have enough free hands to film it.

But then we kept our cameras rollin' for the rest of the show, and got a video of a very special guest (we'll get to that later), as well as one of my favorite 80's rock songs: "Separate Ways" (Journey). And if you don't remember how awesome of a song that is, then maybe you should take another listen...

"Separate Ways" cover at The Famous Door on Bourbon Street.

We're not the only ones who love and embrace this era of music. If you want a great laugh, this "Separate Ways" video remake highlights the glorious paradox of the goofiest sincerity that is "the 80's."

We came, we sold, and we conquered. After having some dinner on Frenchman St. on the night of our exhbition day, we fell asleep, and when we came back to Collision the next day, we fell in love with Moira Mack.

Wyclef was saying some real cool things about AR/VR/AI, in connection with his mysterical project, which was a bit confusing, but once he picked up the guitar, we were captivated by his debut jam with Moira, and that's enough for us to pay attention to whatever he's selling.

As the future moves forward ... It’s a combination of the human being (constantly being inspired) reigning [the] real material[s] and [combining it] with [the] technology.

As fate would have it, a long-time fan (our resident Infrastructure Advisor) managed to meet Wyclef in the restroom - a meeting place as great as any. As per our founding values, we respect privacy and honor, therefore, Rez kept the encounter brief, and perhaps we'll go through the proper channels of speaking with Wyclef again, in a more appropriate environment... 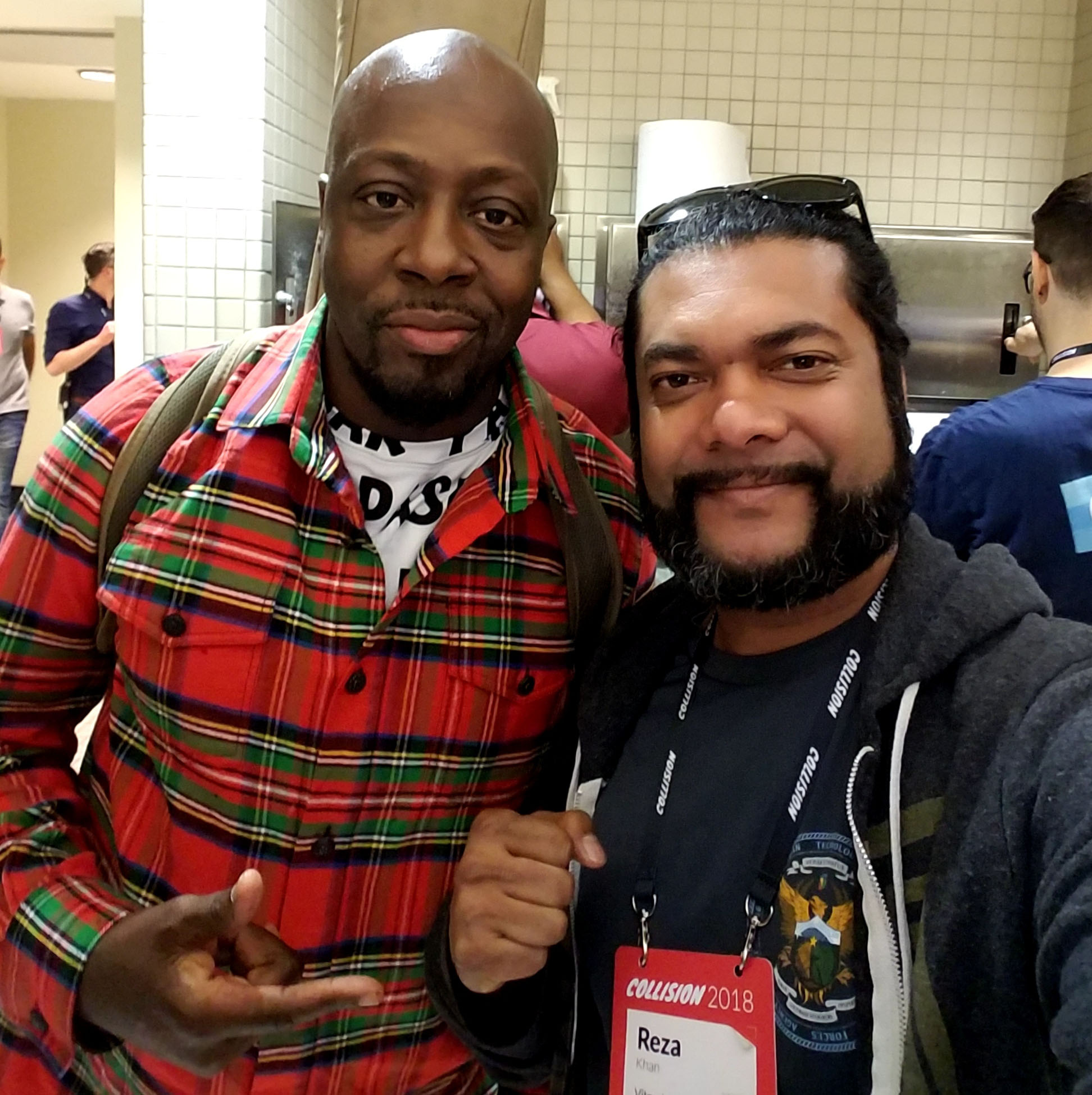 The casual restroom photo with the man, himself (even legends have to pee.)

...shouted, the epic list of famous musicians displayed humbly outside of The Famous Door. We felt compelled to listen, as we stood on the corner of Bourbon and Conti St. seeking out the next memorable music moments of Collision Conf. and Jazz Fest - and we weren't disappointed.

The cover band's set list included "Wanted (Dead or Alive)", "Separate Ways", "You Shook Me All Night Long", and Heart's "Heartbreaker" - all excellent choices - but half-way during the band's performance of "Walk this Way", the players seemed... Intrigued.

Apparently, a certain passer-by had heard a familiar tune and strolled into the bar (and into our collective heart), while, opportunistically, the keyboardist/guitarist jumped off stage (leaving the band confused) to invite music icon Steven Tyler to join in on a verse. Now, we were going to post-produce this video to show the significant bits, but we felt that half the fun is watching the band be just as stunned as the crowd. Take a look at what transpired, and our Top 1 music moment:

Steven Styler jumps on stage (fast-forward to 2:25) at The Famous Door on Bourbon Street.

Back in the city that never sleeps and where the lights are always on, the music's never over (a la Mr. Morrision.)

Typically, the only tickets to be concerned about at an airport are for flights, but when we caught wind of Alice in Chains playing in our town, just 3 nights after our arrival back in New York, it felt pretty obligatory to book tickets for Hammerstein Ballroom while waiting in the terminal on the flight back from NOLA.

After all, what trip would be complete without a proper homecoming?